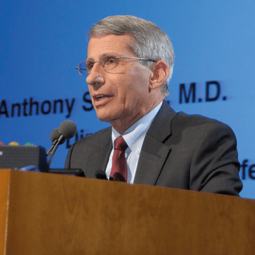 Anthony has served as Director of NIAID for over 30 years and oversees an extensive portfolio of research to prevent, diagnose and treat infectious diseases, including HIV/AIDS and other sexually transmitted infections, influenza, tuberculosis, malaria and potential agents of bioterrorism. He is also the long-time chief of the NIAID Laboratory of Immunoregulation, and serves as one of the key advisors to the White House and Department of Health and Human Services on global AIDS issues, and on initiatives to bolster medical and public health preparedness against emerging infectious disease threats. He has been instrumental in US efforts to fight the ongoing Ebola outbreak in West Africa, and quell public panic over the handful of cases in the US. Still regularly treating patients despite his heavy workload, he recently helped treat a US healthcare worker who contracted Ebola in Sierra Leone.

Anthony has made huge contributions to basic and clinical research on the pathogenesis and treatment of immune-mediated and infectious disease. Achievements:

Judge’s comment “Dr. Fauci’s work with infectious diseases, both in the US and in the developing world, has saved millions of lives. His work demonstrates that all sectors of society are important, and that work with under-represented populations can have truly amazing outcomes.”